A Guide To Bosnian Coffee 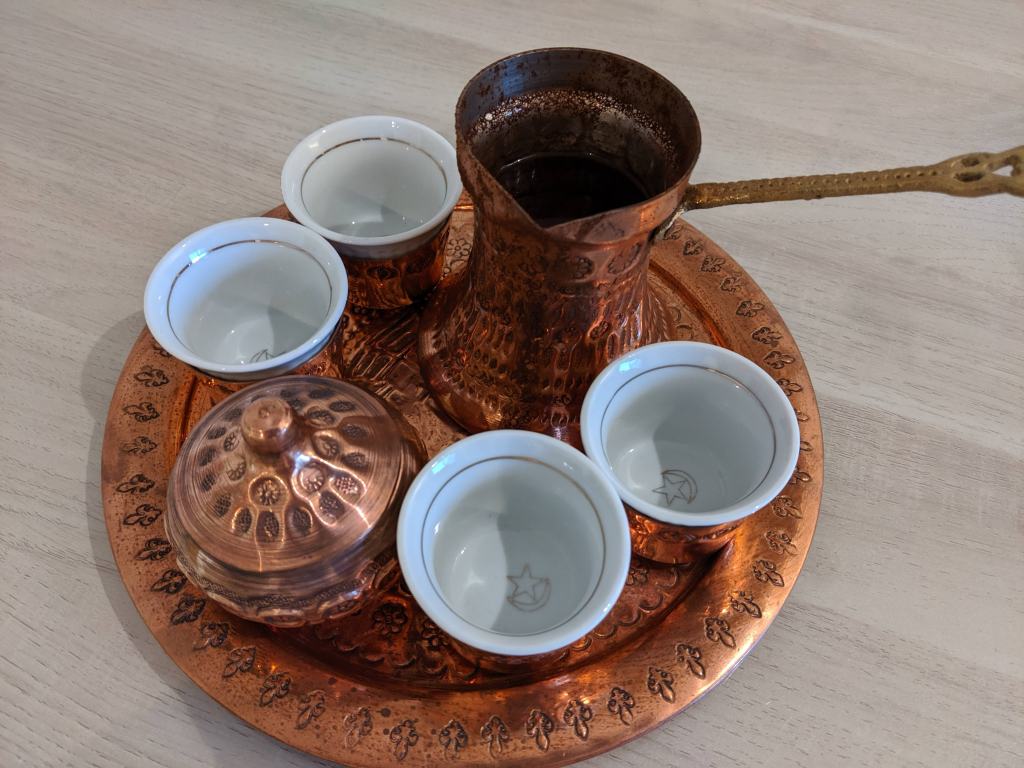 Bosnian Coffee is one of the most important things of note when talking about the identity of Bosnia and Herzegovina. While many people will just call it Turkish coffee, this would be a mistake. Other than being poured from a similar vessel, the preparation and serving of Bosnian coffee is completely Bosnian.

I have a preference for my Moka pot, but I will definitely admit it is not as pretty of a coffee maker as one of these beautiful copper clad sets.

How To Serve Bosnian Coffee

How To Drink Bosnian Coffee

Where To Buy A Bosnian Coffee Set

A traditional Bosnian coffee set is comprised of four main components. The metal pot known as a džezva, the sugar bowl, the serving tray, and of course the cups which are known as fildžan. The traditional metal used is copper, however silver is also quite popular. High quality sets have metal that is hand pounded and engraved with beautiful patterns. These patterns can show nature and landscapes, or significant buildings within Bosnia and Herzegovina. A well-made Bosnian coffee set can last a lifetime if properly taken care of, and will be passed down generations within a family.

A 4 person Bosnian Coffee set will have:

How To Serve Bosnian Coffee

Like the Japanese Cha-No-Yu, an American Crawfish Boil, or Banchan in South Korea, how we prepare and serve our food and drink is a significant part of national culture. When people think of Bosnian coffee, they probably assume it is the same as Turkish coffee, but other than similar serving instruments, the method is uniquely Bosnian. When coffee was brought to Turkey in the 15th century, and the Ottomans controlled most of the land trade routes at the time, they brought Bosnia their culture. However after 500 years, it only makes sense that the style and serving changes, much like an accent or a dialect.

Bosnian coffee begins its life like all coffee. With the raw coffee beans. These are then dried and roasted, and then pulverized into a fine powder using a hand grinder. In Bosnia this traditional instrument is usually placed on the hip and then hand cranked until the coffee inside becomes a very fine powder. While some may resort to using an electric grinder to save time and energy, a hand grinder is still commonplace when properly serving Bosnian coffee.

Then, water is placed in the džezva and brought to a near boil slowly over a low flame. The maker will pour a little of the near boiling water into a fildžan which is set aside. The ground coffee is finally added to the hot water, stirred, and brought to a boil. When a thick, dark foam appears the coffee is done. The fildžan with the reserved hot water is then poured over the foam to help the grounds sink to the bottom and the džezva is left to rest for a minute.

The tray is prepared with the džezva, the Šećerluk filled with sugar cubes, and the fildžan. Common accompaniments served with Bosnian coffee, but not usually on the tray, are glasses of water, and Turkish Delight candies, also known as Lokum.

How To Drink Bosnian Coffee

Just like how the preparation of Bosnian coffee differs from it’s Turkish counterpart, drinking it is also a ritual in itself. The reason people usually add sugar to coffee is to reduce the bitterness, and people here also add sugar to coffee. However they don’t just drop a cube in and that’s it. After they pour the coffee into the small cup, the drinker will take a sugar cube, dip part of it into the hot coffee, then let the wet part dissolve on their tongue. Then they’ll take a sip of coffee so when the coffee and sugar meet in the mouth there is no bitterness. In between every sip one will drink from the glass of water to cleanse the palate. If the drinker doesn’t want to use the sugar cube, they can take a small bite of the Turkish Delight, or Lokum, which has a similar effect as the sugar cube.

1. Pour coffee into the small cup

2. Dip the sugar cube into the cup

3. Rub the wet sugar onto your tongue

4. Take a sip of the coffee

Where To Buy A Bosnian Coffee Set

If you are traveling to Bosnia and Herzegovina, you’ll probably want a Bosnian coffee set as a souvenir. While these sets can be bought in every city and village across the land, the most renowned place is in the capital, Sarajevo. In the heart of the old town exists the oldest street in the city. This street is called Kazandžiluk, and it is named after the coppersmiths who operate there.

Visitors to this street can see the coppersmiths (Kazandžije) pounding away in their shops, working hard to sell their wares. With coffee sets in every size and a variety of metals, this is the place to go to not just buy a set, but to learn how they are made and the history of Bosnian coffee. There are other things to buy on this street as well like tea sets, copper cookware, and more. The set featured here is actually my set I bought during my trip to Bosnia and Herzegovina. As the sets come in all different shapes and sizes it’s hard to give an estimation for what to spend, but I can tell you what I paid. The set cost was 80 KM (Bosnian Convertible Marks) which is about 40 Euros. This is a fair price in my opinion as these are all handmade in Sarajevo, as opposed to cheap knockoff versions that come from China. Make sure they have a stamp on the bottom of the coppersmith.

Note: I would recommend not buying a set in Mostar as they are known for trying to pass off cheap Chinese made ones instead of handmade Bosnian coffee sets. I don’t have anything against machine made cookware, but if you want the most authentic, buy it directly from a guy you can see making them.

Top 10 Things To Do In Sarajevo

Where To Buy Souvenirs In Sarajevo

I’m always excited when new things open up in Lviv. In fact, when something…

6 Things Do In Mostar