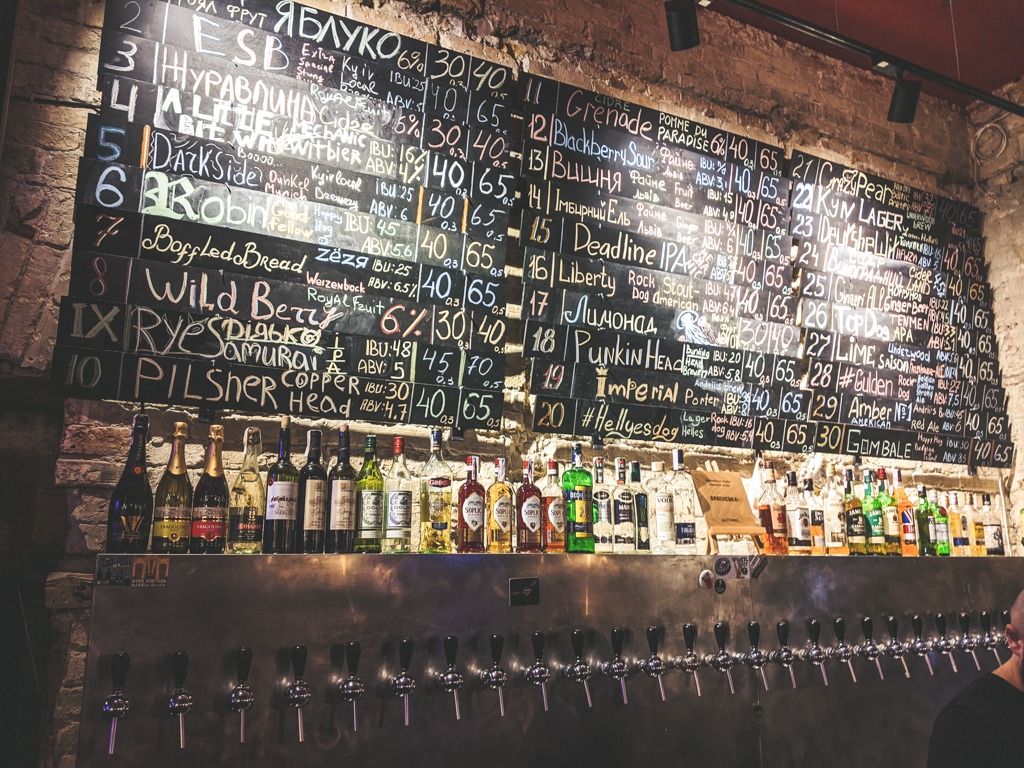 Lviv is known as the cultural capital of Ukraine, and there sure is a lot of culture here. From street music, to Galician cuisine, I firmly believe there is something for everyone here. One thing that many people may not realize is that craft beer in Lviv is quite a scene. Alcohol, of course, is a big part of Ukrainian culture. And while Vodka may be the drink of choice in many cities and towns, craft beer reigns supreme in Lviv. From multi-story beer halls, to bars with taps 30 deep, you can spend a month here and still miss out on new beers.

Check out my list of the Themed Restaurants In Lviv

Pravda Beer Theater is one of the most popular watering holes in the whole city. It benefits hugely from being right in Rynok square. Pravda, which means truth in Ukrainian and Russian, aims to bring “true” beer back to the people. While that may sound a little hokey at first, you’ll soon realize that the expert brewers really do put great effort into crafting their exceptional beers.

The beer theater is split into three above ground levels, plus a basement. On the second floor there is a section for a band where they have live music playing almost every evening. Their beer has won numerous awards, inside Ukraine, and all over the world. One of my favorite things is all the fun names the brewers give to the beer. I personally like their Trump beer which is an Imperial Mexican style Lager (get it…Trump and Mexican beer). Cody likes their Red Eyes, which is a USA style Red Ale, with a humorous picture of a spaceman surrounded by marijuana leaves.

Pravda Beer Theater is open every day from 10:00-02:00. They deliver all over Ukraine, and have free delivery within Lviv if you order at least a crate of beer.

Read more: Cocktail Bars In Lviv | Where To Go For Awesome Cocktails

This place is part museum and part brewery. Walking through the museum portion of Lvivarnya you can learn all about the history of beer in Ukraine; From the first independent brewer, to current day. There are tons of exhibitions including old bottles, and maps of the old brewery. The museum is located a few floors underground, so it feel like you are walking through an old cellar (which very well may be true).

The last room you get to is the tasting room. Unfortunately (and it really makes no sense to me) you have to buy a ticket for the entire experience, even if you just plan on going to the tasting room. I find that a bit annoying, since I’ve already seen the museum, and sometimes I just want to go and get a flight. Yet, you still have to pay to walk through the museum, just to later pay at the tasting room for the beer separately. If you have never been here before, it is totally worth it to go to learn about the history of beer in Lviv, as well as try a flight of the most popular beers on tap. However there is almost no repeat value, since you can get the same beers from other bars around the city, and not pay for a museum you have already seen.

Click here to see the best things to do in Lviv.

One of the other top restaurant groups, Kumpel, also focuses majorly on beer. Every location in the city will have their Kumpel select beers on tap, and you can order a variety of flights depending on your taste preference. Not to mention, the restaurant itself is quite good. There are about 20 different beers on tap, however there can be more or less depending on seasonal offerings. Cody and I will usually go and just split their standard flight.

Kumpel is also part of the same restaurant group as Baczewski which makes a fantastic potato vodka, so if you don’t like beer you can always get some fantastic cocktails.

One interesting thing to note about Kumpel is their focus on unfiltered beers. This is unique because unfiltered beers are generally harder to find, as they do not store nearly as well as their filtered siblings. If you have never had unfiltered before, you will be in for a unique taste. The restaurants are all set around giant beer stills as well, which are quite beautiful to look at. I love the copper color of the insides, and it’s quite a fun atmosphere to drink in.

There are two Kumpel brewery restaurants located around the city center, but Craft & Kumple, which doesn’t brew on site, is located right in Rynok Square.

Robert Doms is a bit of a legend in Lviv. He was a businessman who travelled all over Europe collecting beer recipes to bring back to Lviv and had a true passion for the craft of brewing. It is said his son, Robert Doms Jr. had an even more fanatical passion, and it was he who eventually ran the Lviv brewery (Lvivska) to great success. The brewery itself was founded by Jesuit monks in 1715, and by the 19th century was one of the three most important breweries in the Austro-Hungarian empire.

Today, you can head to Robert Doms Hop House (which incidentally is located right next to Lvivarnya) for a meal and a flight. I personally am not impressed by the food, but the beer is delicious. I like their Dunkel which is a German style dark lager which has a caramel-y malty taste. Cody likes the Robert Doms Golden Ale which is, as the name suggests, a golden ale.

Situated on the grounds of the old Armenian Cathedral in Lviv, Mons Pius is a restaurant housed in the First Lviv Lombard Bank. The bank, which had been in operation for over 300 years, shut down in 1940. Owned at one time by Archbishop Józef Teodorovich, the building didn’t begin reconstruction until the 1970s, at which time the stained glass reproductions were so carefully made.

Beer was brewed here at the Armenian cathedral since the 14th century, using artisanal spring water from the well on the grounds. However, the current restaurant only offers two options. I know it may not seem like a proper choice in an article about beer in Lviv to include a place that only makes two, but trust me, they are both fantastic. The recipe dates back over 300 years and is definitely something you’ll want to try if you are in Lviv.

While the original brewery was founded in 1695, the current iteration has been in business since 1995. The beer is supposedly the same recipe from all the way back then. The two beers on offer are the Lemberg Lager Beer, and the Leopolis Dark Lager Beer. Lemberg, of course, is the Austrian name of the city from their time in charge. Leopolis is the Latin name of the city, named after Leo, son of Danylo (Daniel, King of Ruthenia), the founder of Lviv.

Bratyska has the largest selection of Ukrainian craft beer in all of Lviv, in an ever rotating schedule. At any given time there are about 30 different craft beers on tap from craft breweries all over the country. While Bratyska is not a brewer themselves, they are a great curator for craft beer fans. They also have a large selection of craft ciders as well.

Not sure what to get? Not to worry! The bartender will be happy to explain about the different beers on tap, as well as provide some free samples. I had a great time the last time I went and got to try a wonderful dark beer called Robin from a craft brewery in Odessa.

I would say that this place is more of a pub than a place known for craft beer in Lviv, however they do have a few good choices on tap. You won’t be getting a curated flight here, but you can definitely try some interesting things. I actually decided to go here while writing this article because they have a beer from a craft brewer in Chernobyl. That’s right, this beer is called Opillia Koryfei. Yes, it comes from the same place as the famous nuclear meltdown.

Now, to be honest, it wasn’t a beer I would consider fantastic by any means. It was straight line average, but coming from an interesting place was the reason I got it. They also have on tap beers from Zeman and Varcraft, two other craft brewers in Ukraine.

If you end up going here, make sure to make your way down to the basement where they have a huge statue of a white lion (hence the name).

Varka is a quite little craft beer bar in the center which is usually occupied by locals. They have a few different craft beers on tap, but have about 50+ different bottles from all around the country. This is a good place if you want somewhere not too loud, or are just looking for a casual place for a beer with friends. I’m a dark beer fan so last time I was there I got their Moloko (Milk) Stout which was quite good.

Prices here are maybe slightly higher than places like Bratyska, but that’s just a premium for being right in the center. I like to come here if I want to take someone somewhere they haven’t been before as I rarely see Varka on travel blogs.

I’ll start by saying right now that Choven needs to update their address on Google maps. For a place as popular as it is, everytime I tell people about Choven they always call back saying they can’t find the place. It is actually within the old town, but it shares it’s address with another restaurant. I just tell people to Google maps the “Monument of Smile” and you’ll see Choven next to it on the same alleyway.

The place has a huge selection of draft beers from all over the world, with a focus of course on Ukrainian craft beers. I especially like that they allow you to get mix and match flights so you can try a bunch of different things. You should know that this place is loud. It is usually packed with people and the music is beating. If you are looking for a quiet place, this isn’t for you. But, if you want a night out with friends AND to try some amazing craft beers in Lviv, then Choven is the place to go.

Okay, so this isn’t actually a bar you can go to get craft beer in Lviv, it’s an entire craft beer (and vinyl music) festival. It is put on twice a year by iFest, which is the restaurant group behind Pravda, Kryivka, Arsenal, and so many of the great places to go in Lviv. Of course, Pravda, being already on this list as a top craft beer producer, is the main sponsor of the festival.

This year’s (2020) festival takes place from May 1-3 and there is no cost to entry. Of course you will need to pay for your beers at the various stalls. This is one of my favorite things to go to in Lviv, and tourists come from not just Ukraine, but all over the world. There are live bands playing, tons of food, and of course, great craft beers.

20 Things To Do In Lviv, Ukraine

Lviv is not only the cultural capital of Ukraine, AND one of the most beautiful…