Visiting Ephesus and the Temple of Artemis 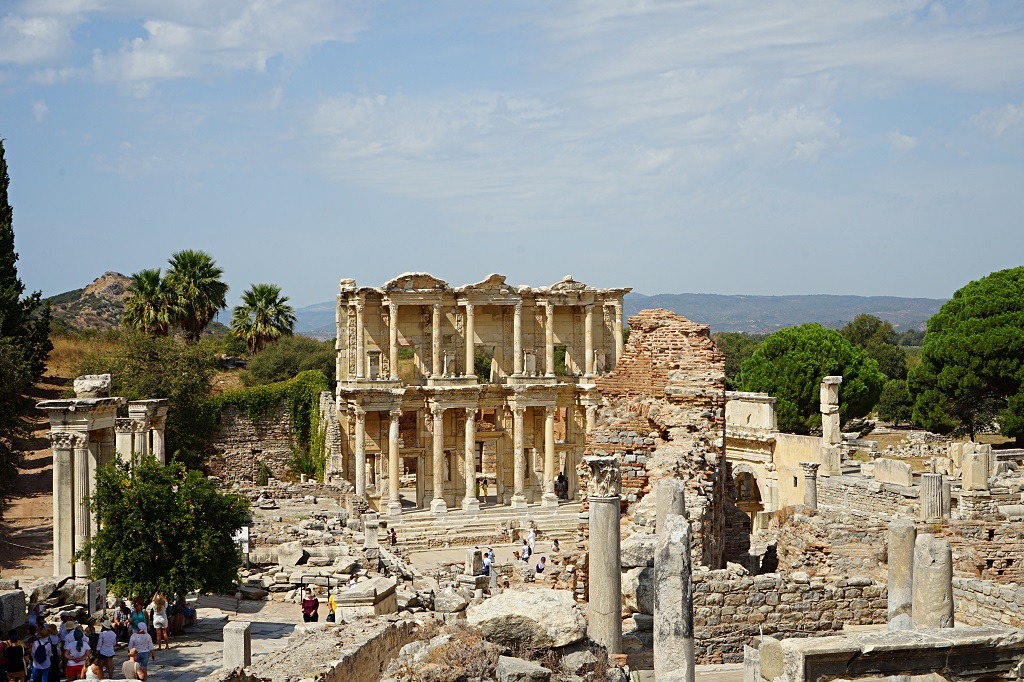 One of the must visit places in Turkey is the ancient city of Ephesus. This is one of the best preserved Greco-Roman cities I have seen in my life and I have been to Greece and Italy many times. Ephesus, to me, is a new understanding of how the cities looked like thousands of years ago. If you know something about the seven wonders of the Ancient World you would know that there is one of them right next to Ephesus – the temple of Artemis. In this guide I explain all about visiting Ephesus and the Temple of Artemis

There are many different ways to visit the ancient city of Ephesus and the temple of Artemis. You can get there with a tour group from pretty much any resort towns like Kemer, Alanya or Antalya, or you can get to Ephesus by yourself if you are travelling all over Turkey and not just doing packaged beach vacations like many Russian, Ukrainian, and Polish people.

Read more: How To Visit Ephesus On Your Own

If you are planning to go to Ephesus on your own here are a few things you need to know before going on your trip:

If you listen to my advice and go straight to the upper gate the first thing that you will see after entering is a Roman bath or Bath of Varius, and the State Agora. I must tell you that the remains of Agora look fantastic. You can clearly  imagine how big and grand the place once was. The Agora had many rooms that were used for different purposes including trade and government business.

Behind the State Agora is the Odeon. It looks like an amphitheater and is also called the “Small Theater”. This is the place where the senate held their meetings as well as small concerts.

The next place that you will see is the Prytaneion. This was the place where a flame burned day and night. It was dedicated to the goddess of the family (some kind of an eternal flame). Nowadays only two massively tall columns remain of a place that once looked like a grand temple.

After the Prytaneion on your left you will see a viewing terrace. This view is amazing and it allows you to see that Ephesus even now is not just a bunch of the stones, but a proper city with a few streets and many buildings. That’s what surprised me the most!  In Athens and in Rome the ruins aren’t connected and I couldn’t draw for myself a clear picture of how the whole city looked like. Ephesus on the other hand gives you a chance to see the whole infrastructure.

Down the street on your right you will see the fountain of Trajan, one of the most well regarded, if not the most, Roman Emperor. The fountain had two stories and two pools. Between the columns on each story were statues of Roman Gods and members of the imperial family. The statues that were found at this site were taken to the Ephesus museum.

Read more: 10 Things To Do In Cappadocia (Goreme)

Further on you will see a covered building which is called the house blocks on the slope. This is a place that needs a separate ticket to get in. This house is one of two luxurious houses that were built on the street. This house had three floors with many frescoes and mosaics all over, along with a central heating system and wooden furniture.

One of my favorite parts in the old city of Ephesus is the Library of Celsus. The facade of this building was well preserved and restored and even now you can see all the small details in the amazing decoration. Pay attention to the ceiling, it is fantastic and gives you a wider perspective to imagine how grand and beautiful this building once was.

Unfortunately, behind the facade there is nothing to see, just an empty space.

The final site that you will see before exiting the old city of Ephesus is the Grand Theater. The theater has a 24,000 people capacity, which for its time was an unbelievably high number. The theater is still undergoing some restoration work.

To get to the temple of Artemis you can go by walking (around 30 minutes) or just take a taxi at the exit of Ephesus city. The taxi should cost not more than 20 TL ($2,5).

The temple of Artemis is part of Seven Wonders of the Ancient World and although there is not much to see, except one column and a few other pieces, it is a must-visit place while you are visiting Ephesus.

Visiting Ephesus and the Temple of Artemis

5 Foods In Istanbul You Have To Try

Going to the city where east meets west? Here are 5 foods in Istanbul you…

The Best Way To Visit Pamukkale

People in Turkey say that Pamukkale is the eighth wonder of the world. Although, other…